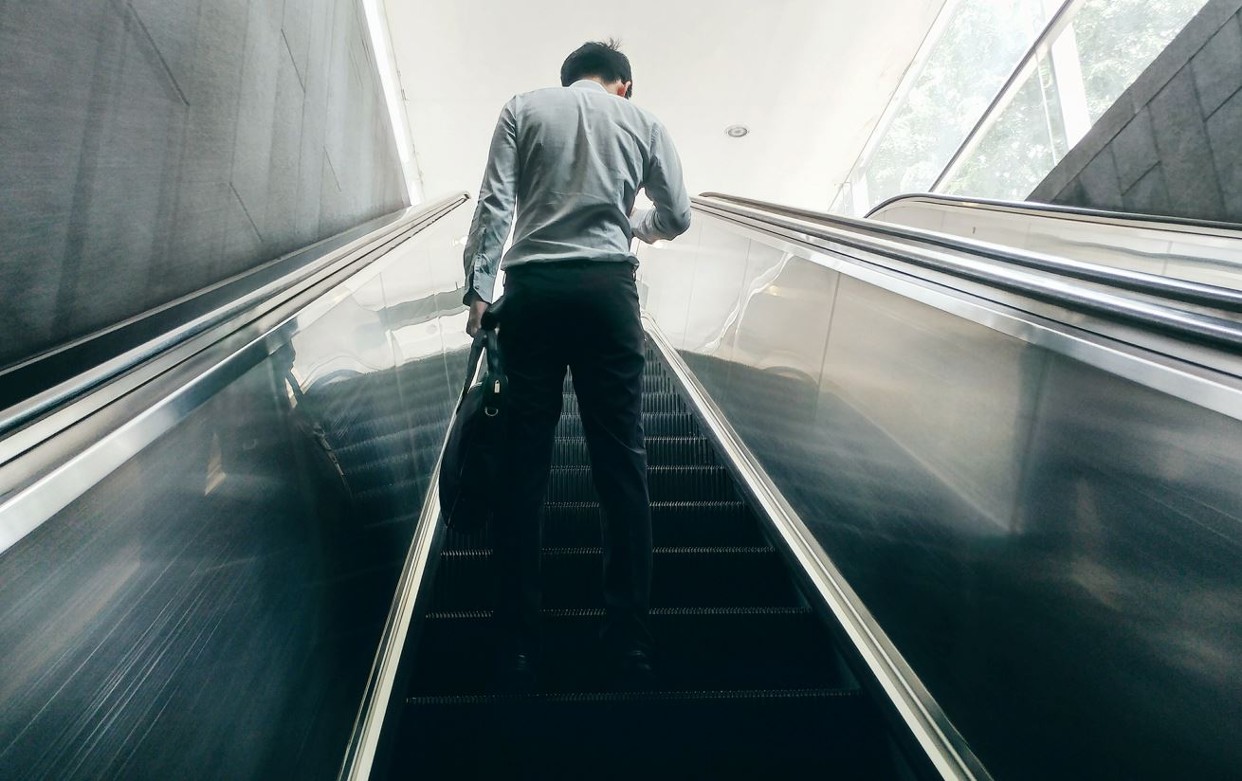 There’s an old joke about someone saying “I’m writing a novel” and his friend replying “oh yes, neither am I”.  It’s a conversation often repeated in those parts of investment banks which still employ humanities graduates; lots of people think they have a novel in them, and many even start writing it, but somehow the job always gets in the way.  So the ambition gets postponed to retirement, and all too often forgotten.  But if you’re plugging away at National Novel Writing Month in between revising slide decks, take heart from Michael Whitworth, whose “The Camel and The Butterfly” came out this year.

Michael was a VP at Credit Suisse for fifteen years, before the 2015 round of restructuring saw him taking voluntary redundancy.  But unlike a lot of laid-off bankers, he took stock of his finances and realised that this might have been the opportunity he needed.  A few years earlier, he and his family had moved out of London to live in Wellingborough, Northamptonshire.  This town is some seventy miles north of Docklands, meaning that he faced a barely survivable four hour daily commute by train and Tube, and ended up being told that the education system would class him as an “absent parent”.

Having traded out of the London property market meant that the redundancy payment more than covered the remaining mortgage, making it possible for the family to live on his wife’s income while he took two years writing the novel and another year finding a publisher for it.  He’s now seeing his son, doing promotional book club interviews and presumably enjoying a lifestyle that’s less likely to result in severe stress-related illness.  For the kind of person who looks up from their desk at 2am and says “do you know, I never really thought I’d be a banker”, it’s living the dream.

The secret, of course, is partly to have cashed in property wealth, and partly to be capable of living your dream on a household income of £2.5k ($3.4k) a month.  (And, of course, the emotional maturity to not mind that your partner is now the main breadwinner).  With interest rates where they are, bankers who had presumed that they were going to retire in their forties just because they were earning so much are likely to be disappointed; even a modest lifestyle like the Whitworths would require an investment portfolio of over a million dollars, and to keep an average banker in the style to which they’d become accustomed might require multiples of that.

Whitworth might be in good company. Now that more and more companies are getting cross that their ping pong tables are going unused and declaring “Work From Work Wednesdays”, lots of people, including bankers, are likely to start thinking about what they might do with the large fraction of their lives they are spending doing something they fundamentally don’t want to do.  This could be the dawn of a golden age of literature, as we get all the stories which were previously lost to structured derivatives.

Elsewhere, the convention in most markets is that profits are the result of hard work and talent, but losses are because of central bank manipulation.  At the moment, however, even the most senior private equity executives are having a hard time pretending there isn’t a strong element of macro and luck to their returns.  “I didn’t expect things would snap back so dramatically”, as David Blitzer of Blackstone puts it.

The joy might be short-lived.  Gary Gensler, the head of the SEC, has suggested that once he’s finished giving the public markets a hard time over payment for order flow, and brought some Wild West justice to the crypto industry, private equity is next.  He’ll be focusing on the conflicts of interest intrinsic to the industry, and on the extent to which investors are overcharged.

Gensler might not be short of whistleblowers in any such investigation.  Although sell side investment bankers need the private equity industry, and have grown rich (although infuriatingly not quite as rich) alongside them, financial sponsors clients have never been popular; they’re demanding in terms of work and pricing, and often quite bad at remembering to say thank you.  With the combination of regulatory stress and a possible turn in the interest rate cycle, we might soon find out who were the real players and who were just “overpaid, overopinionated and overleveraged”.

Fintech can make you rich quicker than investment banking if you pick the right firm and the right time – 75 of Klarna’s employees are now paper millionaires at the current valuation and an IPO is planned for next year. (Sifted)

An unforeseen cost of business in equity market-making; Ken Griffin is having to hire lawyers to send cease and desist letters to retail traders who are angry about meme stocks and who keep hiring billboards and airplane banners to spread conspiracy theories about him. (Institutional Investor)

The UK’s Financial Conduct Authority is hiring outside London, with an office of 100 staff in Leeds. It will also be hiring in Cardiff and Belfast, but only for home workers as it doesn’t plan to have premises there.  Since the FCA’s office culture in London is quite famously bad, this might be a good thing. (Financial News)

A look back into the past; Deutsche’s path to where it is now arguably started with Hilmar Kopper, the chairman who first brought it seriously into the investment banking industry.  Here’s a profile of him from 1993, showing how it all began (Euromoney)

“Humility leads to curiosity, and curiosity is an extraordinarily powerful tool, it allows you to investigate and look at things with a different perspective”.  UBS ruled the Australian market for ages, but in this year’s surveys they have been badly hurt by poaching, particularly by the start up Barrenjoey.  They’re now trying to build back. (AFR)

How good are things in the market right now? Well, there’s literally a global shortage of private jets.  Both NetJets and FlexJet have stopped taking on new customers. (FT)

Photo by Ashfaq KP on Unsplash