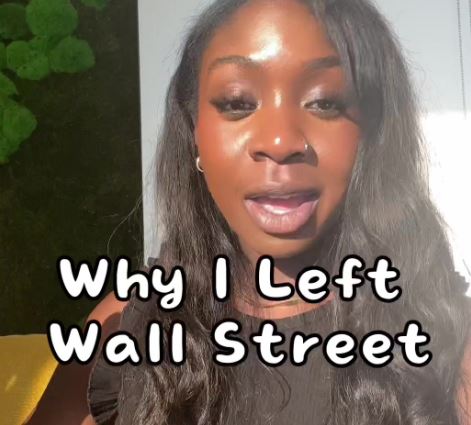 A Goldman Sachs analyst with a popular TikTok channel has left the bank for a buy-side job where she says she'll earn more and will get the chance to work from home.

Naeche Vincent featured in a Bloomberg article on Wall Street TikTok personalities last week. She subsequently posted a video on her TikTok channel explaining that she'd left her job in a Wall Street bank for the buy-side and said that her new job offers better perks and better pay.

In her new role, Vincent said she will be working “hybrid, permanently, like forever," whereas her old banking job was "pushing towards five days a week" in the office. In her banking job, Vincent also said "all the benefits" had been removed, "they took away all our free food, they took away like free gym membership." If her previous employer wanted her in the office, Vincent said they should at least given some perks as an inducement to return.

Vincent doesn't say so in her videos, but it appears that her former employer was Goldman Sachs. She spent two years as a legal analyst at the firm in New York and joined alternative investment manager as a legal coordinator in August.

When she joined her new employer, Vincent says she was greeted with an invitation to work from anywhere during August: "They were like go and enjoy your life, take your laptop that we’re going to provide you, go!" She also gets a week off at Christmas.

Vincent says her former employer was stricken by staff exits and that the work was getting "kinda boring."

In a previous video, she lamented the need to change her nails when she was called back into the office after the pandemic.